We Are Excited To Announce

Teresa Romero As Our 2022 Keynote Speaker! 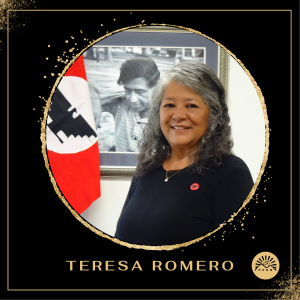 The first Latina and first immigrant woman to become president of a national union in the United States, Teresa Romero replaced Arturo S. Rodriguez as the third president of United Farm Workers in December 2018. Formerly the union’s No. 2 officer as secretary-treasurer, she has years of experience overseeing the complex financial management, administrative, staff recruitment, personnel, fundraising, IT and social media operations of a far-flung organization involved in field organizing, contract bargaining and administration, legislative and legal affairs, and far-reaching international initiatives. Romero worked closely with elected UFW leaders as chair of the union’s audit and finance committee. She ran fundraising efforts that collected $1 million to build the UFW’s new state-of-the-art 10,294-square foot facility in Salinas serving the largest concentration of unionized farm workers in the nation. Before joining the UFW, she managed a construction company and a law firm that helped workers with immigration and workers compensation claims. Teresa Romero is an immigrant from Mexico who is proud of her U.S. citizenship and Mexican and Zapotecan heritage. She has played an important part in many recent successful union efforts, is admired by her peers for her work ethic, calm competence, organizational skills, ability to build relationships, and Si Se Puede! Spirit. For the last few months Teresa has attended several immigration negotiation meetings for the Blue Card legislation sponsored by Congress woman Zoe Lofgren. This legislation would give farm workers and their families a path to citizenship if they have worked and continue to work in the agricultural industry for a certain number of years. In May of 2019 she received the Ohtli award by the first Mexican woman ambassador in the United States. This award is given on a yearly basis to Mexican citizens who work in the U.S. and help promote their culture while opening paths for other Mexican nationals. As President of the United Farm Workers she has been in discussions with the Mexican government to help put emphasis on the dairy and agricultural industries that refuse to hire woman. She is dedicated to change that type of atmosphere and create a system to apply in both the U.S. and Mexico to hire woman while also helping create an environment in which woman are no longer enduring verbal, mental and sexual abuse. Teresa is aware and humbled by the fact that many farmworker women see themselves in her. She’s helping pave the way and empowering women. Si Se Puede!