The Northwest Digital Archives’ PCUN Digital Collection contains correspondence, newsletters, publications, photographs, newspaper clippings, audio recordings, and other documents that provide a window into the history of the largest labor union and Latino organization in the State of Oregon. These PCUN records are available in both English and Spanish through the following link.

May 1977 The Willamette Valley Immigration Project (WVIP), precursor to PCUN, is founded in response to an increase in Immigration & Naturalization Service (INS) raids in Oregon. It provides legal advice and representation to undocumented workers.

1981-1982 WVIP conducts interviews with reforestation workers to document their living and working conditions. WVIP also responds to massive INS raids and deportations of treeplanters between 1982-1984 by obtaining the release of some workers, and through protesting at the Portland INS office. 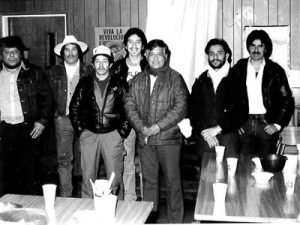 1982-1985 WVIP staff campaigns against the revival of the “Bracero” (also known as “guest” worker), program, which was part of proposed immigration legislation during the Reagan administration. WVIP advocated for a general amnesty for all workers. 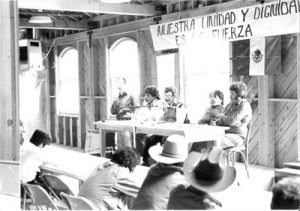 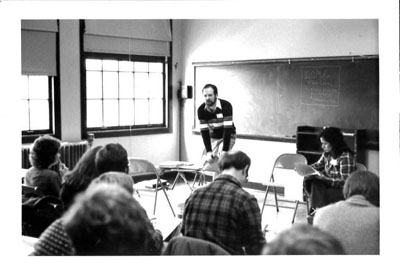 April 1985 PCUN is founded as Oregon’s union for farmworkers and treeplanters. WVIP continues its service and immigration work through PCUN’s Service Center for Farmworkers.

1986 The Immigration Reform and Control Act is signed into law, allowing all those who had been living undocumented in the United States since Jan. 1, 1982 or who had worked in agriculture for ninety days between May 1, 1985 and May 1, 1986, to apply for residency. 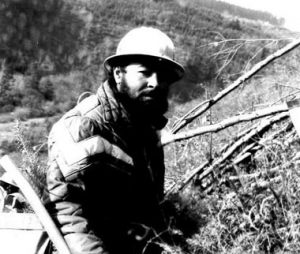 1987-1988 PCUN and Service Center staff assist 1,300 immigrants to file applications seeking amnesty under the 1986 legislation. The INS approves 98% of these applications.

1988 PCUN founds the Project to Stop Pesticide Poisoning with the goal of identifying pesticides used on various farms, documenting pesticide exposures, and informing farmworkers of the dangers of pesticides and the resources available to them through PCUN. PCUN also shifts its focus to improving wages and working conditions for farmworkers, and joins other organizations to promote legislation that would give farmworkers collective bargaining rights. In September, PCUN moves into a 6,000-square foot former church building adjacent to the cramped house which had served as the union’s first home.

1990 The “Red Card Campaign” is kicked off during the summer harvest season. PCUN organizers ask workers to document their hours and earnings, then compare this with their pay stubs. PCUN files wage claims with the Oregon Bureau of Labor and Industries for more than 100 workers. PCUN also wins a federal lawsuit invalidating a state law which drastically restricted workplace picketing during planting or harvest of crops. This law, originally enacted in 1963, made strikes virtually impossible.

1991 The first farmworker strike in Oregon since 1971, and the first- ever union-organized strike, is organized by cucumber pickers at Kraemer Farms to demand a raise in pay. PCUN co-founds Farmworker Housing Development Corporation to build and manage decent, affordable housing in towns and with farmworker participation.

1992 Kraemer Farms retaliates against former strikers and PCUN declares a boycott of grower-owned NORPAC Foods, Inc., then the largest processor of fruits and vegetables West of the Mississippi River. PCUN targeted NORPAC Foods to pressure Kraemer Farms, a NORPAC co-owner.

1995 PCUN organizes the Tenth Anniversary Organizing Campaign to raise wages in the strawberry harvest. Through a series of strikes and organizing actions, the wage paid per pound increases two to three cents-25% to 33%–on most area farms, after nearly ten years of stagnant wages. Total pay in the 1995 strawberry harvest increases an estimated $1,000,000. 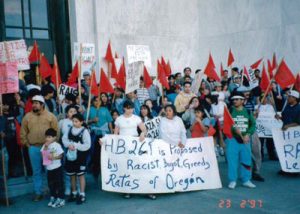 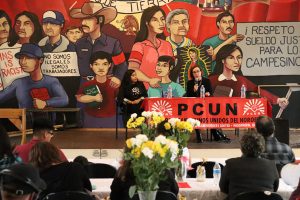 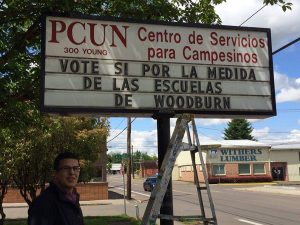 1999 PCUN escalates the NORPAC boycott through a nationwide tour of college campuses, and also gains the support of the Canadian Labour Congress for the boycott. Gardenburger agrees to sever ties to NORPAC. 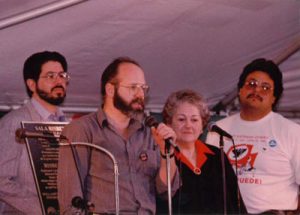 2000 PCUN joins the United Farm Workers of America to forge a compromise with major national agribusiness associations on a legislation to offer legal status to more than two million farmworkers and immediate family members. The proposals, titled “AgJOBS”  failed in the closing days of the 106th Congress. The debate centered largely on whether currently unauthorized workers should be granted only a guest-worker status, an immigrant status, or a temporary status that would enable workers to “earn” an immigrant status. The September 11, 2001, terrorism stopped legislative momentum for these proposals.

2002 After nearly ten years of boycotting, the four top food services nationally pressure NORPAC Foods Inc.to end its stonewalling and negotiate with PCUN to establish a framework for collective bargaining on NORPAC member farms. PCUN suspends the boycott. The agribusiness lobby tries to scuttle the NORPAC talks by persuading the Republican-led Oregon Legislature to pass an agricultural collective bargaining bill which strips farmworker of most boycott rights. Governor John Kitzhaber vetoes the bill.

2003 The NORPAC talks deadlock as do negotiations on a state collective bargaining law. PCUN and CAUSA build on the 2002 nationwide coalition for the campaign “One Million Voices for Legalization,” (promoting passage of a new legalization program for undocumented immigrants) by organizing the Oregon contingent of the Immigrant Worker Freedom Ride, sending fifty immigrants an supporters on a thirteen-day trek to Washington D.C. and the Statute of Liberty in New York City. PCUN and CAUSA are co-founders of the Campaign for Comprehensive Immigration Reform, uniting key immigrants rights coalitions, national unions, and national advocacy organizations to forge principles and strategies for immgration legislation which includes a path to citizenship for undocumented immigrants. PCUN President Ramón Ramírez is chosen as one of fifteen honorees nationally to receive the Ford Foundation’s Leadership for a Changing World Award.

2005 FHDC opens its first housing project situated outside of Woodburn, the 48-unit Colonia Libertad and the first farmworker housing in Salem.

2006 In April and May, PCUN and CAUSA organize and facilitate two huge immigration rights mobilizations (18,000 and 12,000) at the Oregon State Capitol in Salem. On November 20th, the 96th anniversary of the Mexican Revolution, PCUN fulfills a decades-old dream and culminates months of intensive organizing and construction, PCUN’s low-power radio station, KPCN-LP (“Radio Movimiento”) signs on broadcasting on 96.3 FM and reaching three-hundred square miles around Woodburn. Radio Movimiento’s volunteer-driven programming quickly attracts a large and loyal listenership in the Latino community.

2008 PCUN collaborates with sister organization, Voz Hispana Causa Chavista, to organize Latino voter participation in the historic primary and general elections. On a campaign swing through the Willamette Valley just before Oregon’s hotly contested primary in mid- May, Senator Barack Obama stops in Woodburn for lunch with a half dozen PCUN leaders.

2008 PCUN stops a “move-in” attempt by a full-power commercial station which would decimate Radio Movimiento’s broadcast range, negotiating a settlement approved by the Federal Communications Commission which shifts Radio Movimiento from 96.3 FM to 95.9 FM. The move actually increases KPCN-LP’s signal strength in North Salem and parts of Keizer.

2009 PCUN stepped into a leadership role nationally on the steering committee of the massive Reform Immigration for America campaign. With PCUN’s support, Voz Hispana Causa Chavista started the “PCUNcitos Club”, cultivating leadership in middle schoolers close to the Movement. On October 7th, 2009–the 60th anniversary of the birth of PCUN co-founder Cipriano Ferrel, PCUN and sister organizations formally launched the campaigns to establish the “CAPACES Leadership Institute” whose mission will be to engage current and emerging movement leaders about values and big strategic ideas, and to help them develop the skills to put those ideas to use.

2012 The CAPACES Leadership Institute (CLI) was completed. The CLI, originally a project of PCUN, is a 501 (c) (3) non-profit organization whose mission is to prepare leaders with the political consciousness and capacity to lead and support social justice work. Over $750,000 was raised to build the CLI and over 1500 volunteers participated in the construction process.

2013 PCUN and CAUSA lead a state wide campaign that successfully restores driving privileges for undocumented immigrants. Governor John Kitzhaber signed HB2517 in front of thousands of supporters during the May 1st rally/march at the capitol.

2014 Shortly after HB 2517 was signed into law, the Oregon Driver’s Card is referred to the ballot through a referendum by a local anti-immigrant group. Measure 88 became the Safe Roads Campaign, and the first bilingual and bicultural ballot measure campaign in the history of Oregon. The measure was defeated by a landslide in Oregon, giving birth to a new generation of electoral organizers focused on political power building in the movement, and to the One Oregon Coalition housed at Causa Oregon.

2016 Pineros y Campesinos Unidos del Noroeste (PCUN) and a coalition of labor, social justice groups, worker advocates, immigrant rights, and economic justice organizations push Oregon lawmakers to raise the state’s minimum wage to $14.75 per hour in Portland, $13.50 in smaller cities, and $12.50 in rural areas. The legislation increases the current statewide rate of $9.25 gradually over six years, topping out in 2022. The higher standard will help lift millions out of poverty around the state.

2018 PCUN begins its transition of leadership process, making Reyna Lopez the first womxn to lead the farmworker union in Oregon. The organization also does an update of its mission, vision, and values – merging Accion Politica PCUNista, and Pineros Y Campesinos Unidos del Noroeste, to create a hybrid community organization and union structure. Now both organizations are under one roof, under the banner of PCUN.

2018 After 13 year struggle PCUN and Causa pass the Oregon Driver’s License Restoration for all Oregonians – despite their immigration status.

2019 PCUN and United Farm Workers lobby in Washington DC to pass the Farm Work Force Modernization Act. In December of 2019, it passes in the congress with Speaker Pelosi stepping onto the floor to take a vote – a move she rarely makes in her leadership position. Despite the historic vote, the Senate does not take any further action on the policy.

2020 Unprecedented wildfires, and a global pandemic. COVID-19 cases are almost 40 percent Latinx, despite being only 13 percent of Oregon’s population. Causa, and PCUN team up to bring undocumented workers much needed financial aid through the Oregon Worker Relief Fund – which has dispersed over $30 million dollars to workers left out of federal stimulus programs and unemployment insurance.