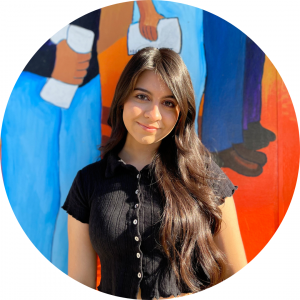 April Alvarez was raised in The Dalles Oregon, and is the daughter of Mexican immigrants from Jalisco, Mexico. As a first generation Latinx woman studying Political Science, April has always been passionate about immigrants rights and building  electoral power for the Latinx community in Oregon.

In college, April became a member of Oregon’s only Voto Latino chapter where her passion for electoral organizing grew. She began working with young Latinx students to engage them in the process of voting and elections. Helping increase her college campus voter turnout and registration. She then became the President and sat on community organizations and boards in her community.

Since then, April has worked at the office of Representative Teresa Alonso Leon as their lead intern. She was the Organizing Director for Representative Anna Williams in the HD 52 campaign. Where she led voter outreach, electoral field efforts, and was part of her re-election victory.