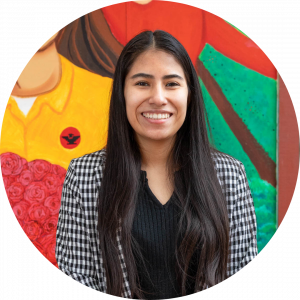 Cynthia was born and raised in Salem, Oregon to parents from Michoacan and Oaxaca, Mexico. In 2020, Cynthia became the third person in her family to graduate from college with a B.A in Politics and a minor in Classical Studies from Willamette University.

While at Willamette University, Cynthia was involved with Alianza Club, a Latina/o/x cultural club on campus spreading information about the Latina/o/x culture to campus and the wider Salem community. She helped plan and run the Dia de Los Muertos event with other club members. Additionally, she was immensely involved with the Tokyo International University where she built strong relationships with the international students and integrated them on campus. After graduating from Willamette, she became a part of PCUN’s Electoral Team working on the 2020 elections doing phone banks, text-banks, and ballot assistance. She became even more passionate about working with the community and is temporarily coming back to PCUN as the Advocacy Organizer.