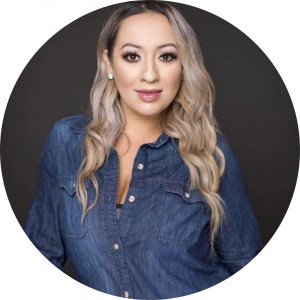 Patti Verduzco, born and raised in Hood River, Oregon. Daughter of immigrant parents who migrated in the 70’s to Oregon from Mexico, and where they decided to start a family.

Patti, integrated in the music industry at the young age of 10, along with her 4 siblings where she traveled all over the Northwest, performing with her family band while playing her accordion to Norteño music. This is where she discovered the passion to serve for her people.

Through music she connected with her GENTE and she knew she had a mission to help make a difference. By age 16 she was doing graphic design for her band, from flyers to band posters. By then she had discovered she had a big passion for graphic design and communications but most importantly for those less privileged. She barely finished high school and jumped right into the working world. She was too eager to help her community, as she continued traveling with her family band. Her first job was at age 17, with the Community ACTION, as an outreach specialist. Helping the less fortunate, create opportunities and resources.

Soon after, she got involved with community leaders and expanded her experience in both the organizing, and communication world.

In 2015, Patti and her sister Martha (also a community leader), launched Hood River Latino Network and Verduzco Services. The goal was to provide resources for their Latinx community and offer hope to those without a vote or voice. 6 years later Patti got the opportunity to navigate to the city and become the Communications Director for PCUN an Organization with the same values and mission as hers, at large. PCUN helps empower farmworkers and working Latinx families in Oregon by building community, increasing Latinx representation in elections, and policy advocacy on both the national and state levels.

Now as the Communications Director, Patti plans to become an inspiration to those without a voice and less privileged.

Never stop dreaming because hard work pays-off and what will continue to matter is who YOU are, and what you stand for!