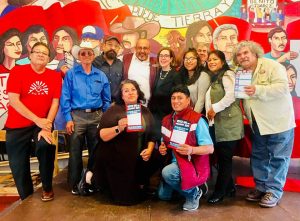 Pineros y Campesinos Unidos del Noroeste (PCUN) has been working with immigrant populations in Oregon for over 40 years. As the largest Latino union in the state, many of our members would be impacted if Measure 105 passes.

The group responsible for getting Measure 105 on the ballot, Oregonians for Immigration Reform, has been officially designated as a hate group by the Southern Poverty Law Center (SPLC). The SPLC says this about them, “For almost two decades OFIR has demonized immigrants while working closely with nationally recognized anti-immigrant groups and figures.”

One of the reasons we were founded was the stop raids and discrimination in Oregon. We want our families to feel safe, welcomed and not racially-profiled in the state we all call home. We don’t want to go back to the days when law-abiding Oregonians and their kids were dragged out of their homes.

We need to protect Oregon’s values. We need to vote NO on 105 this fall.